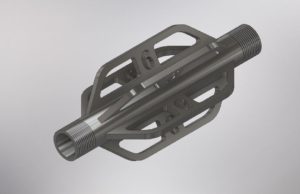 So the question is what's the "right" size?

It's obviously important that the skid is small enough to avoid common obstructions found in sewer and storm pipelines, including protruding taps, offsets, deflection, etc. However, you also want it to be large enough to distribute the nozzle cleaning force to the pipe wall as evenly as possible. If you are cleaning a 10" pipe with a rotating nozzle with a 6" skid, the cleaning force on the pipe crown is going to be greatly reduced. Conversely, if the nozzle extension/skid hangs up on multiple obstructions in the line, the operator can't use it. So, there's an important balance between small enough to clean without hanging up and large enough to clean both the pipe invert and the pipe crown.

We understand the importance of using the right sized skid and know operators need an easy way to know what size skid they're using. This is why the pipe size is clearly visible in every fin of our nozzle extensions/skids.

Have a great day!